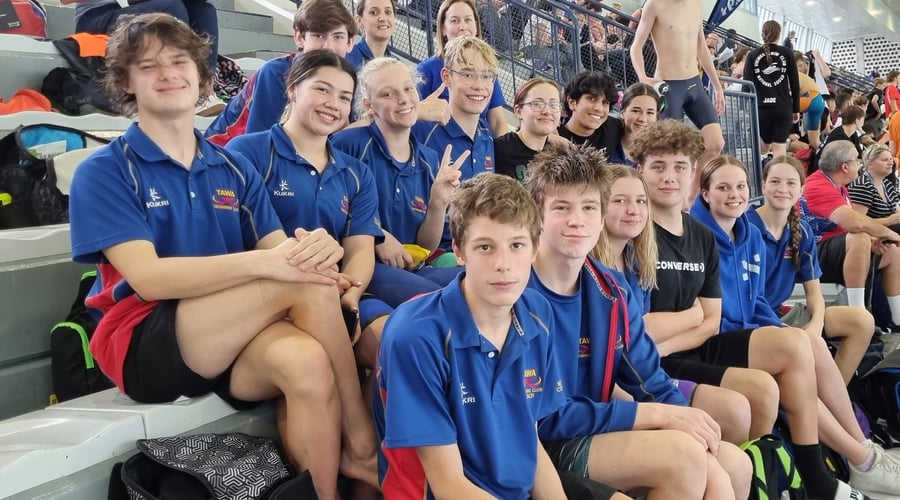 The team set off for Dunedin to compete in the Div II competition on Saturday 7 May for five days of racing. The team consisted of 12 swimmers and 4 parents, with another 2 swimmers and 2 parents joining the team later in the week. We’d lost one team member due to testing positive for Covid a couple of days earlier, but this was the largest team the club has taken to Div II in recent memory.

On arrival, we explored Larnach Castle and the iconic Baldwin street (the worlds steepest street). We spent hours at the castle and the kids were fascinated by how people lived back then. We escaped Baldwin street without any injuries, the main aim of coach Nadia!

To say we were excited about racing is an understatement. As a club we love this meet, with the swimmers appearing to feel less pressure than other national meets, and from day one it showed in the results. Every swimmer who swam on day one achieved a PB (Personal Best), and it set the scene for the rest of the meet. The team would swim hard, cheer hard, and have lots of fun when back at the accommodation. The commentator even got to know our team, not only for our loud cheering, but because we had a number of swimmers in the finals each night.

The location of the accommodation was great, and Dunedin’s weather played along most of the time, so you often found us walking to and from the pool. This was great bonding time, and the close location offered the flexibility for swimmers not competing at the start of the session to come to the pool later.

There were some good swims and there were some great swims. The standouts were 1) Ollie’s 200IM race where he not only took 11 seconds off in his heat swim in the morning, he took an additional 3 seconds off in the final to earn himself a second place; 2) Nathan’s 50 Fly where he came out of nowhere in the morning and blew everyone out of the water in the evening getting first place; and 3) Hara’s incrreadibly well paced 400IM where he ended up winning by more than a length. The evening relays were also a stand out. It’s incredible to see what a swimmer can do when they are competing for a team, and Bella’s excellent 100 Free times were an obvious example of this. We had some great swims in the relays, and had a team on the podium in six out to the eight relays.

Div II always has a dress up theme for the last day and this year it was comic book & superhero. At the lunch break we went into town and cleared a shop out of it’s dress up costumes. There were lots of clothing alterations during the break, as swimmers bodies just don’t fit into size 6-9 outfits, but we looked awesome and strode into the pool complex in style.

You can not summarise an away trip without mentioning the food and organisation required. Whether it’s the 4kg of home baking in Hara suitcase that put his baggage overweight, the incredible effort from Cath and Monika in the kitchen, or Suzanne’s oversight to keep things running smoothly. Turning Bargain Box into a smorgasbord that suits everyone’s taste is a great idea and something worth writing home about. Even the copious amounts of spinach was used up by the end of the week. Without fail, morning tea, lunch, afternoon tea and dinner were timed perfectly and the food was there when the kids needed to eat.

Div II was a great meet for the club. It holds a very important spot on the swimming calendar and fills an essential place for swimmers who are either growing into the sport or those that due to abiliy, time or resources are not able to compete at NAGs (National Age Group Championships). It is a shame that this view is not shared by Swimming New Zealand, who have chosen to devalue Div II by renaming it to a competition rather than a Championship, and replace medals with ribbons akin to a beauty pagent sash.

Finally, Tawa at Div II - by the numbers.

We are TAWA. We are MIGHTY. We are ONE.